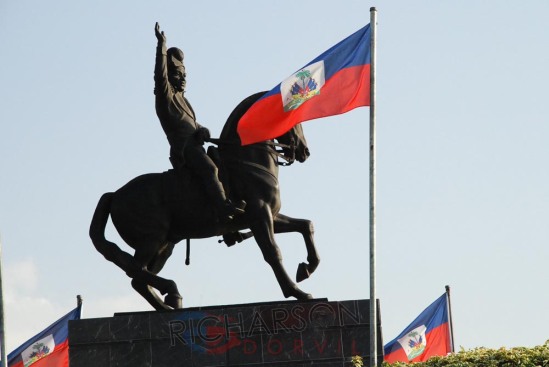 “Painting Bois Caïman isn’t about painting the concrete details of what happened the night of the ceremony since, as noted earlier, that’s not possible. But what it can do it offer a representation of memory; a lens through which to see a moment that’s long gone but resonates still today. It can capture that “creative spiritual and political epic” even if it can’t glean from history’s undocumented moments the minutia of an August night on a Caribbean island in 1791.”

August 14, 1791 marks the beginning of the Haitian Revolution with the vodun ceremony of Bois Caiman. Presided over by vodun priestess Cecile Fatiman and priest Dutty Boukman, the ceremony served as a religious and strategic gathering for the enslaved African population in Haiti. The two spiritual leaders organized the assembly in the woods on the outskirts of Cap Haitien.

Boukman’s Prayer at Bwa Kayiman, the African, Vodun war council on August 14, 1791 that began the Haiti revolution launched on August 22, 1791.

“The God who created the earth, who created the sun that gives us light. The God who holds up the ocean, who makes the thunder roar. Our God who has ears to hear. You who are hidden in the clouds, who watch us from where you are. You see all that the White has made us suffer. The White man’s god asks him to commit crimes. But the God within us wants to do good. Our God, who is so good, so just, orders us to avenge our wrongs. It’s our good God who will direct our arms and bring us victory. It’s our good God who will assist us. We all should throw away the image of the white man’s god who is so pitiless. Listen to the voice for liberty that sings in all our hearts.”

Shortly following the ceremony on August 22, Africans and their allies led rebellions against the French colony starting in the north. Though not the first African led uprising in the Americas against slavery and empire, the ceremony is remembered for sparking the next thirteen years of resistance of the Haitian Revolution.

Generals Toussaint Louverture, Jean-Jacques Dessalines, Alexandre Petion and Henry Christophe along with women warriors such as Sanite Belair, Marie-Jeanne Lamartinière and Toya Mantou led the fierce war against the armies of France, Britian and Spain. Dessalines successfully defeated the last French forces on the island on November 18, 1803 and declared independence on January 1, 1804.

Two centuries before the Revolution, when the island was called Santo Domingo by the Spanish Empire, historian Antonio de Herrera would say of the place, “There are so many Negroes in this island, as a result of the sugar factories, that the land seems an effigy or an image of Ethiopia itself,” quoted by Dr. Paul Farmer on page 61 of his 1994 book, “The Uses of Haiti.”

Haiti was the principal source of wealth for the French bourgeoisie. In the decade before the Boukman Rebellion, an estimated 29,000 African captives were imported to the island annually.

Conditions were so brutal and the work was so back-breaking that the average African survived only seven years in the horrific sugar factories.

“After 13 years of war, the Africans beat the French armies, the English armies, the Spanish armies and a US embargo and all their mercenaries to create Haiti.”

“223 years later, on this August 14, 2014, Haiti still fights off the return of the enslavers. The epic struggle for Haitian liberty and human rights continues in 2014. Haitians fight off the white invaders and their Black collaborators to keep their offshore islands, regain nation sovereignty. Fights off the taking of lands won in war after three hundred years of slavery, 147 years of paying an Independence debt (slave trade debt), first to France and then to the United States and in rivers of blood and pain for 210 years of European containment in poverty and trade blocking.”

Note: What is known as ‘Latin America’ is a misnomer, it actually is ‘South America.’